With the transfer of land development rights through joint agreements coming under the GST, there is a growing anticipation in the realty sector that it would trigger a spate of litigations.

A January 2018 notification brought the transfer of land development rights by owner to a developer in joint development agreements (JDA) in the Goods and Services Tax (GST) ambit.

“It is a developing law and there are bound to be disputes during implementation, prompting individuals or builders to take legal recourse,” Advocate Paritosh Sinha, of Sinha & Company, said. The city-based law firm has received queries from developers to help resolve disagreements with land owners.

Anticipating a flood of lawsuits, the city’s legal fraternity is busy studying the fine print of GST rules or debating with tax consultants to understand its implication on real estate deals. “Law firms have to arm themselves with in-depth knowledge before framing formidable arguments to resolve disputes between builders and landowners. We are tracking closely amendments in the GST rules,” a senior Kolkata lawyer told ET, refusing to be identified. “Our target is to obtain verdict in our favour since real estate disputes involve high stakes running into crores.”

The JDA is common in the real estate sector where the landowner transfers property to the developer or authorises and in turn, gets apartments or a certain amount of revenue or a combination of both.

Traditionally, in JDAs involving area share, the landowner was believed to be transferring only his ownership interest in land. Stamp duty was the only payable unless a separate consideration was reached on development rights. Landowners, hence, had no issues with a JDA for an area share till the January notification slapped GST on both the landowner and the developer.

“Besides, the need for additional compliances by the landowner under the GST law, the notification has also brought up issues concerning valuation of development rights as the consideration is in kind, not cash,” said Arvind Baheti, Executive Director, Khaitan & Co. Baheti said that landowners will now have to obtain GST registration, file returns, pay tax and maintain books of accounts even if they are not willing to undertake additional compliances.

Tax experts say that since there is ambiguity with respect to the point in time when the tax has to be paid, conflict between the landowner and the developer look imminent. “While the landowner would like to pay GST at the time of entering into a agreement to protect his interest and recover the same from the builder, the developer would prefer to postpone the GST payment on development rights to save on interest costs,” explained a tax consultant. 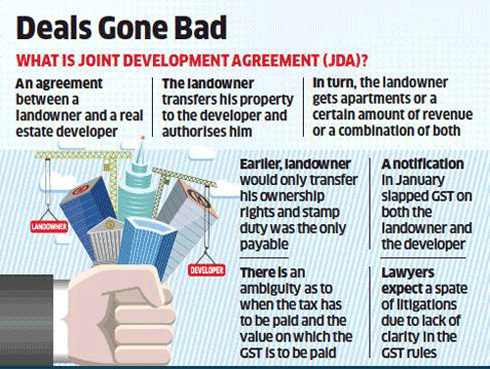 Kolkata’s real estate circle has voiced its concern on the point of taxation and valuation of flats being allotted to landowners, prompting Credai Bengal, the umbrella organisation of builders from the state, to seek a clarification. Industry experts say that the GST notification assumes significance in the backdrop of rising trend of majority of landlords and builders entering into JDAs, instead of outright land deals. While builders prefer JDAs as it supports their capital light business strategy, landowners choose it for its higher revenue potential than just a one-time consideration.

Self-redevelopment of properties could be a trillion dollar opportunity

Renters Will Continue to Struggle for the Next Decade, Harvard Study Says