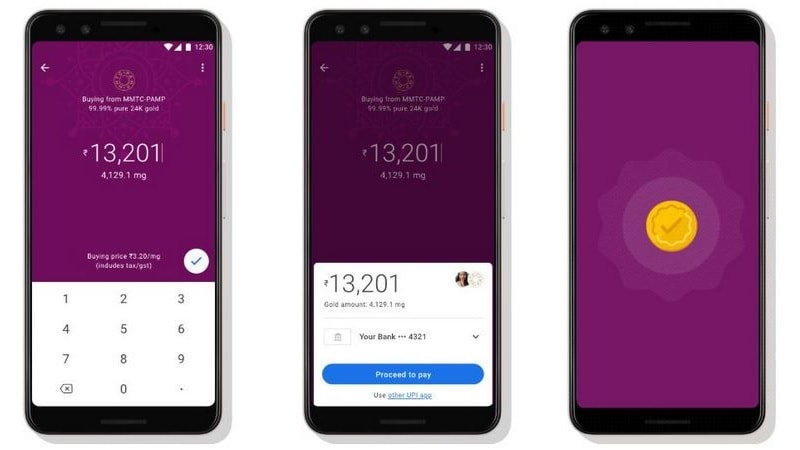 Aiming to make Google Pay more useful for Indian users, Google on Thursday announced its partnership with MMTC-PAMP India for buying and selling gold through the application.

“Google Pay users would be able to buy 99.99 percent, 24 karat gold after this partnership with India’s only LBMA accredited gold refinery,” the company said in a statement.

With this, Google Pay users can purchase gold for any value that will be stored in secure vaults on their behalf by MMTC-PAMP. The users can buy and sell the gold any time at the latest price, refreshed every few minutes, as displayed on the Google Pay app.

“Gold is core to Indian culture and tradition, making India the world’s second largest consumer of gold. Keeping this in mind, we introduced gold buying and selling feature on Google Pay for millions of Indians who can buy gold right from their mobile phones,” said Ambarish Kenghe, Director-Product Management, Google Pay, India.

“This feature is created for millions of Indians who buy gold especially during festivals like Akshaya Tritiya, Dhanteras or Diwali,” he added.

The announcement came as the Delhi High Court on Wednesday asked the Reserve Bank of India (RBI) and Google India Digital Services Private Limited to file a reply on a plea alleging Google Pay not being listed as an authorised operator as per a list of the ‘Payment System Operators’.

The petitioner has sought direction to the RBI to stop Google Pay operation in India.

How to Get Your Home Ready for an Open House

Tips To Buy Homes That Would Be Rented Out For Profits

Can You Still Get a Seller to Pay Your Closing Costs in Today’s Housing Market?